Panelcraft offers the world’s first and only large-scale magnetic construction sets. Our products come with curriculum to teach PreK-6 students in the areas of Science, Technology, Engineering, Art, Math (STEAM),  and even literacy! Whether you are starting STEM or STEAM in your school/organization, or looking for an amazing educational building toy, we have a product for you.

Our vision is to be the world's best magnetic construction toy company.

Our mission is to design, manufacture, market and sell the world's best and only large-scale magnetic construction toys in order to empower children to design, build and explore their world.  To do this, we support organizations where children play with the highest quality products, educational materials, and services.

Panelcraft originated from co-founder, Chad Richert's dissatisfaction with construction toys he had experienced at children's museums.  During family visits he noticed it was usually the parents that did the constructing while the children stood and watched, due to the complexity of the assembly system. Other construction toys he had seen seemed cheaply made and were disappointing to use.  As an architect it felt natural for him to design a better system, however he was unable to create a fastening system that was simple enough for children to use until one day Jeff Whittaker introduced him to a bookcase he had designed in which all of the fasteners had been substituted with magnets. 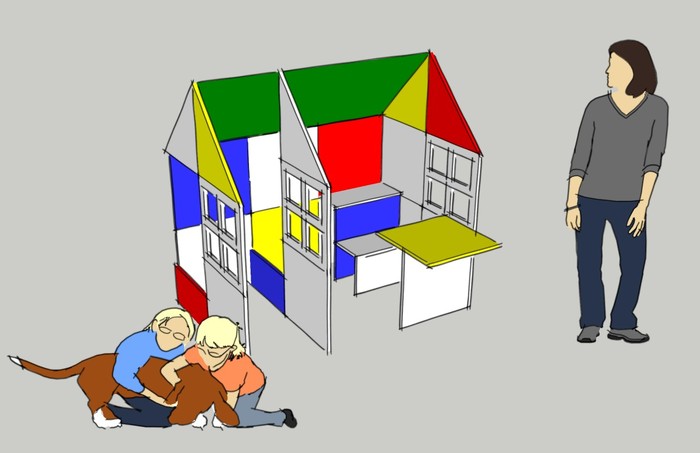 This lead Chad and Jeff to design and build the first Panelcraft prototype set using plywood panels with magnets glued into holes drilled in the edges. They built about 15 pieces for this project and it was then tested by their respective children who loved it. It was amazing to see all of the clever uses they came up with; however, Jeff's wife, Maureen, was concerned that the heavy wooden panels could injure children if the panels fell. Another problem was that not every edge would connect, due to the fixed polarity of the magnets. 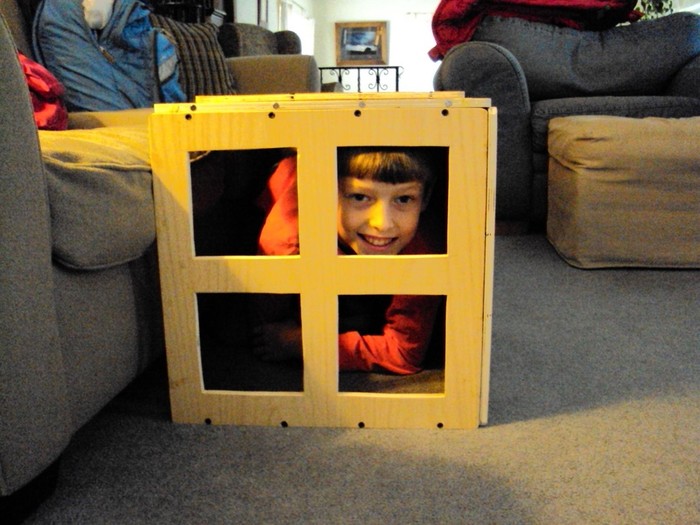 First prototype made from plywood.

From this, they decided to make a lighter version with spherical magnets that rotated in corner sockets. This idea was different enough from any other magnetic toy that they decided to file for a patent. The second prototype was a clear improvement. However, making the panels one at a time from sheets of PVC plastic was extremely labor intensive, so they decided to create a still further improved third generation design taking advantage of all of the benefits of plastic injection molding techniques.  The third design, made from high quality ABS plastic (The same type of plastic used to make Lego bricks.) turned out even lighter and consisted of nine inch square panels and nine inch square frames. They then conducted a small production run to test the capabilities of our carefully chosen magnet and plastics manufacturers. It was immediately clear that they had hit upon a toy that children truly loved due to the almost endless construction capabilities it offered. It turns out, children experience satisfaction and build self esteem when they are able to create usable artifacts at their own scale. In June of 2014 Panelcraft won the Creative Child Magazine Toy of the Year Award.

Panelcraft is now producing its fourth-generation design, which was funded by our highly successful Kickstarter campaign.

2015 marked important milestones for Panelcraft. They created  a new, colorful Dream Builder product, were picked up by major catalogs for the early learning market including the Kaplan Early Learning Company, and in December of 2015 Panelcraft was featured on the DIY Network's "I Want That".

As 2016 began, Panelcraft came full circle by opening a major construction exhibit in the Impression 5 Science Center in Lansing, Michigan. This 380 piece exhibit employs the new Rainbow colored sets, and Chad Richert is finally satisfied with the quality found in a museum's construction toy! 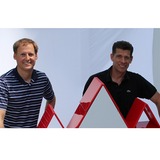 earned his Master’s Degree in Architecture from the  University of Michigan, and heads both the Architecture and Energy Technology Departments at Henry Ford College.  His Life-long interest in how children learn, play, and interact with the spaces around them lead him to initially design the Panelcraft concept for his two young children.

Since our beginning in 2014, Panelcraft has been committed to bringing safe and quality building toys to children. We would like to reaffirm this commitment and assure you that Panelcraft’s products comply with the highest levels of US and European safety standards. Through rigorous testing, we maintain strict control and supervision over the quality of our products to ensure we provide the magnetic building sets you have grown to know and trust.

Thank you for your support.